The City of Slaton, Texas was founded as a division point by the Santa Fe Railroad in 1910.

During the height of its operations, the Santa Fe campus included a depot, dining house, employee reading/recreation facility, round house, and numerous other smaller buildings.

After years of consolidation, in 1990 only one original Santa Fe building remained – The Harvey House.

After learning that the Santa Fe Railroad planned to demolish the building, a group of concerned Slaton Citizens took quick action and purchased it from the Santa Fe Railway…now known as the Burlington Northern Santa Fe.

The building was built by the Santa Fe for The Fred Harvey Company to operate, serving Santa Fe train passengers with high quality meals around the clock. It also featured a newsstand and gift shop, where travelers could purchase post cards, toys, tobacco, candy, and southwest-themed gifts.

The facility was operated by a manager who hired “Harvey Girls” whose legendary grace and service were immortalized in American history by memories, books, songs, and a Judy Garland movie. 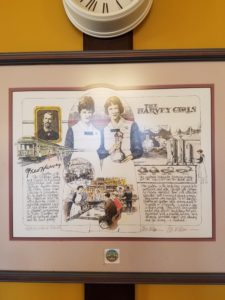 Many local residents still remember the excitement of dining in what was then one of the most upscale restaurants in West Texas.

The eating house was closed in 1942, a casualty of faster diesel engines and dining cars added to trains. The Santa Fe repurposed it to use as their passenger and freight depot, then abandoned the building in the early 1980’s.

Restoration and a return to its roots

Today, the Harvey House is enjoyed by thousands each year, from school children learning about their history to railroad history buffs viewing the historic Santa Fe and Harvey House artifacts.

The Harvey House is used for club meetings, receptions, weddings, reunions, and parties. It has hosted concerts, original theatre, bingo nights, football watch parties, and dozens of other events.

It has become a popular train-watching location, and a cultural centerpiece for travelers.