Weeds had grown around the Matador Half-Dugout and the doorway was open to the wind and rain when the National Ranching Heritage Center (NRHC) went to dismantle it log by log—not to destroy it, but to preserve it.

The half-dugout was originally built in 1888 close to the family home of J.C. Davis in Dickens County, Texas. Davis built it as a place where his four boys could sleep. After the boys were grown, he traded the property to the historic Matador Ranch for use as one of 17 line camps across the 900,000-acre ranch.

The bunkhouse cowboys left carvings, drawings and bullet holes in the red clay walls of the half-dugout. The bullet holes were the result of lighting the first fire of winter as cowboys stood with six-shooters in their hands to kill rattlesnakes forced out of the fireplace by the heat.

“People forget,” said 46-year-old Jim Bret Campbell, executive director of the National Ranching Heritage Center (NRHC) at Texas Tech University in Lubbock. “Without a storyteller, history doesn’t exist. The story gets lost in time as if it never happened. We are the storyteller that helps preserve the values, integrity and character that have always been part of ranch life.”

Most dugouts were constructed between 1875 and 1900, a time period that saw the demise of the buffalo and the displacement of western Native American tribes. For the first time in the history of North American settlement, the population spread into the grasslands of The Great Plains where they found no timber for houses, few springs for water and no fuel for warmth.

Pioneers on the Great Plains usually built a dugout first, scooping out a hole in the ground. If they could find a small sloping hill, they would build a half-dugout using the embankment as side walls and blocking the front with a wall of cut sod or poles from scrub cedars or cottonwoods. Roofs were often made of hides, sod or thatch.

The 1888 Matador Half-Dugout has been restored at the NRHC as a classic example of dugouts that served as both homes and bunkhouses during the westward movement of the nation’s growth. Since its conception in 1966, the NRHC has developed a 27-acre museum and historical park with 51 historic ranching structures that represent the birth, growth and maturity of ranching in North America.

In addition to presenting an outdoor museum free of charge to the public, the center also incudes a 44,000-square-foot indoor museum with seven galleries of Western art, photography and artifacts.

“Ranching and the westward movement of America share the same chapter in the history books,” Campbell said. “Together they tell the story of families who moved out of their dugouts and log cabins to build houses, schools, churches and cities that millions now call home.

“The core concept at the beginning of the center was that dozens of structures spanning the decades since the genesis of ranching would preserve ranch history by restoring and preserving its architecture.”

Today that vivid portrait of life on the wide-open spaces lives again in the Western version of Colonial Williamsburg. From windmills to a one-room schoolhouse, from blacksmith shop to barns and bunkhouse, the restored structures are thriving on admiration their original owners never dreamed they would deserve.

Campbell is quick to point out that the historical park is more than buildings. It is the people who made lives in the structures and created stories, legends and history in the process.

The restored 1886 XIT Ranch division headquarters is a good example. Moved stone by stone from Deaf Smith County, Texas, the structure was reassembled in Lubbock, dedicated in 1977 and furnished as it was in 1893 to 1904 when Ira Aten was the foreman.

A former Texas Ranger and sheriff of Castro County, Texas, Aten was hired to stop the cattle rustling that was rampant along the New Mexico-Texas line. The situation was so bad that Aten painted all the windows of his bedroom dark green so a cattle rustler’s bullet would never find him. Today the windows are still dark green.

The end of the Indian wars in 1875 made it possible for cattlemen to ranch on the Southern Great Plains, but the windmill made it possible to stay. When windmills were introduced into arid country, settlement began to occur, ranching and agriculture began to prosper, and the railroad steam engine brought the outside world to the rural West.

Steam engines required water, and railroad depots with windmills began to dot the rural western landscape. Communities grew around the depots, and the distance shortened between neighbors. Cattlemen began to load their cattle on cattle cars closer to home rather than continue the long drives to distant railheads.

Although the NRHC has seven windmills of varying types in recognition of this westward development, the eighth and newest addition is a massive Eclipse windmill with a 22.5-foot wheel. The new Canon Ranch Railroad Eclipse Windmill was built in 1898 near Sheffield, Texas, was the third largest windmill made by the Eclipse Company and is listed on the National Register of Historic Places.

With the extension of railroad lines into the grasslands, the architectural landscape of the West began to change. The sod house frontier came to an end as settlers on the Great Plains—especially women—longed for the comfort and status of a frame house. Few things changed the architectural look of the interior West more than a frame house, a sound barn and a windmill—all made possible by lumber brought by rail and all represented in the NRHC historic park.

The structures at the NRHC have been arranged chronologically to exhibit the evolution of ranch life from the late 1700s through the 1950s. All the structures but one were relocated, restored, and furnished for period correctness. A 1.5-mile paved pathway provides wheelchair and stroller access to each structure. Posted signs give a history of the structures in both English and Spanish, and visitors with smartphones can download an app that will locate them in the park and provide photos, audio and text about each structure.

“The National Ranching Heritage Center has more than 60,000 visitors a year from throughout the world and annually hosts 5,000 to 8,000 children on school field trips,” Campbell said. More than 160 community volunteers assist in the educational programs of the center, and special public events require 200 to 250 volunteers, many dressed in period clothing.

TripAdvisor, the world’s largest online travel advisory site, has placed the NRHC in its Hall of Fame for earning a Certificate of Excellence from 2015 through 2019 as a result of consistently high ratings from travelers.

The atmosphere created by the outdoor park may be the greatest attraction of the center. The park makes visitors feel they’re in a rural area in another time and place even though the massive Texas Tech campus with 38,000 students is just over the hill. Those hills on the flat plains are actually berms created by moving and covering the debris left from the 1970 tornado that damaged downtown Lubbock. The berms were planted with native grasses and wildflowers, and trees were added to provide shade along the pathway.

Designed to commemorate the open-range era in the West, the NRHC entrance dramatically features 19 life-size rangy bronzes of Longhorn steers that were cast in a variety of poses before being strung out to resemble a walking herd. Each steer weighs 750 pounds and carries the brand of its donor. The brands represent some of the most historic ranches in Texas.

The moment a visitor drives past the walking herd and stops to see why 19 Longhorn steers are on the front lawn is the moment when the epic story of ranching and the nation’s westward expansion begins to unfold for a new generation. 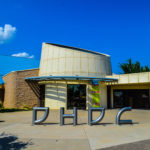