There are few places in West Texas that locals know and really don’t want you to find out about. One of the best is Balmorhea. With 3.5 million gallons at 76 degrees year round it’s the iconic oasis in the desert. Being over 500 miles from the ocean us locals would rather you go south and let us enjoy these pristine and unpopular waters.

Balmorhea State Park has welcomed heat stricken visitors for over 80 years. With 15-million gallons of water seeping through the sandy bottom every day, there is no other place like it.

From being visited by Spanish explorers in 1583, irrigation ditches for farming in the 19th century, and then in 1934 work done by the Civilian Conservation Corps began construction of the 1.75 acre double wing swimming pool.

Yet all this work almost came to an end of use in 2018. While the annual cleaning was taking place, large sections of structural damage, ultimately resulting from erosion, to sections of the pool’s interior wall. The wall was in danger of collapse.

So for over a year the pool was closed. The watering hole of the west was unavailable to the public.

In March of 2019, Texas Parks and Wildlife announced the reopening of the crystal clear waters. Once again people in West Texas can freeze in the cool waters in the heat of the summer.

We want to remind the reader of the fragile nature of this man made wonder. Be respectful especially if you are east of I35. You are coming to a much loved and often over looked (from a financial standpoint) state park.

On site are bathrooms, camping, picnicking. So if you are coming to swim, study nature or just enjoy a natural wonder remember to respect our public lands. 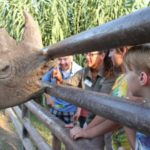 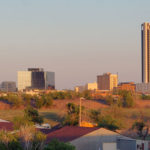