As the sunset bursts over the plains, yielding brilliant orange, pink, blue and yellow, the heart of the Texas Panhandle begins to light up. Amarillo, originally named Oneida, sits in the middle of the Texas Panhandle, boasting its wide-open spaces and true spirit of the West. Made famous by the early 1980’s George Strait song “Amarillo By Morning,” Amarillo takes its name from the Spanish word for yellow, due to the plentiful yellow wildflowers that grew nearby at Amarillo Creek and Amarillo Lake. Also known as “The Yellow Rose of Texas,” Amarillo holds history, heritage, and beauty that are true markers of the West.

A city that holds almost 200,000 people, Amarillo feels like a small town, where everyone knows everyone. Henry B. Sanborn, known as the “Father of Amarillo,” and his business partner Joseph F. Glidden, began buying land to move the city from the original Oneida east to what is now Amarillo proper. Once proclaimed “Helium Capital of the World,” Amarillo was host to some of the most prolific helium fields. Amarillo is also home to Pantex, the only nuclear weapon assembly and disassembly facility in the United States, which is a major employer of the area. The location of the facility has given rise to a native-favored nickname “Bomb City.”

Palo Duro Canyon, the second largest canyon in the United States, lies on the southern edge of Amarillo and attracts visitors from around the globe. Palo Duro Canyon homes a distinct hoodoo, or tent rock, that resembles a lighthouse. As you enter the canyon, the deep reds and rust colors are stark against a clear blue sky and you can feel the spirit of the original settlers of the area. When visiting Palo Duro Canyon, explore on foot, mountain bike, by car, or even by horse on more than 20 miles of hiking and equestrian trails. Camping, geocaching, and studying the unique canyon wildlife, including bird watching, offers limitless options for everyone. During the summer, be sure to get tickets to the TEXAS Outdoor Musical, which explores the trials and tribulations of the settlers in the area in the 1800s. Set against the backdrop of Palo Duro Canyon, TEXAS is filled with original music and the true spirit of the West.

Located 20 miles north of Amarillo, the Alibates Flint Quarries National Monument is a site that was well-known by mammoth hunters as the best location to find stone for their weapons and tools over 12,000 years ago. While centuries have passed, the flint still found in the Texas Panhandle remains useful and valuable. Visiting the quarries gives an insight on how vital this area was to survival, commerce, and culture in the High Plains.

Speaking to the traditions of the true West, Amarillo is the home of the American Quarter Horse Museum. Since 1940, the American Quarter Horse Association has paid homage to the horse that settled the west, and in 1984, built its headquartered building and museum in Amarillo along Interstate 40. The museum showcases the Hall of Fame timeline exhibit, as well as vital pieces of the area’s history. Keeping the cowboy culture alive, Amarillo has hosted the Working Ranch Cowboy Association World Championship Rodeo since 1996 and brings the Tri-State Fair and Rodeo in every year during the third week of September since 1921.

While Amarillo’s roots lie in the true West, the local arts and culture scene brings visitors from all over the world. Cadillac Ranch, one of the most iconic roadside attractions in the United States, lives in Amarillo. Cadillac Ranch was built by a San Francisco based art collective called “The Ant Farm” in 1974. The attraction features 10 buried Cadillacs nose-down in the dirt at the same angle as the Great Pyramid of Giza. Hundreds of thousands of visitors stop at Cadillac Ranch to leave their mark on the Cadillacs with a can spray paint each year.

The arts community in Amarillo houses many acts in the state-of-the-art Globe-News Center for the Performing Arts. Opening its doors in 2006, the center showcases the Amarillo Opera, Amarillo Symphony, and the Lone Star Ballet, along with other arts events. The Amarillo Little Theater, built in 1927, is one of the oldest continuously operating community theaters in the country. ALT currently runs performances on two stages – ALT Mainstage and ALT Adventure Space – which includes performances like Legally Blonde, Momma Mia, Sister Act, and many more. The Amarillo Museum of Art holds more than 1800 works of art, containing both Asian and Western art, intertwined with modern and contemporary American Art.

They say everything is bigger in Texas and The Big Texan Steak Ranch and Brewery takes that statement to the max with their famous 72-ounce steak challenge. If the brave soul can scarf down the steak and its hearty side dishes within the hour, the meal is on us!  Living right off of Interstate 40, The Big Texan offers larger than life Texas flavors and handcrafted, in-house beers. Amarilloans are no stranger to unique dining experiences – evident in places like Six Car Pub & Brewery, Amarillo’s largest microbrewery and restaurant. With locally sourced grains and interesting dishes, the name “Six Car” is inspired by the streetcar system that used to run down Polk Street, the city’s center. YCSF Craft, also known to locals as “Yellow City,” brings new American street food style dishes, a variety of vegetarian and vegan menu options, rotating craft beers and wines, and organic sodas. Featured on Travel Channel, the Texas Bucket List, Zagat, and many others, Yellow City brings bang to your buck.

Built on the Mother Road, Amarillo lives and breathes its connection to historic Route 66. One of the first residential and business districts of Amarillo located on 6th Avenue, visitors will find over one mile of art galleries, antique and collectible stores, restaurants, and bars in historic buildings. With a storied past of dances and music acts, The Nat Ballroom is home to over 100 vendors offering quirky finds and memories of the past. The 806 Coffee + Lounge, home of Amarillo’s longest running Open Mic Night and eclectic local and traveling music acts is the intersection of art and expresso. With specialized vegetarian and vegan goodies, interesting caffeinated creations, and local artist displays, you’ll leave feeling just like the locals. If food is your forte, head over to The GoldenLight Cantina, the oldest cantina in both Amarillo and on Old Route 66. Attached to the Cantina is a premier live music venue, hosting any and every genre. Take a stroll down the historic district to learn Amarillo’s role in Americana culture from locals and shop owners who are passionate about their history.

Family is vital to the make-up of Amarillo, and we have many ways to get your family out and about. With its successful inaugural season in 2019, Hodgetown, home of the Double -A Amarillo Sod Poodles, is the perfect place to take your crew out to the ball game. Hang out with Ruckus, the team mascot, grab a helmet full of nachos, and watch as the Soddies bring it home. Ready to be wowed? Jump on the rides at Wonderland Amusement Park in northern Amarillo, the third largest in the state of Texas! Across from Wonderland in Thompson Park, check out the Amarillo Zoo with 15 acres of over 60 species of animals. Get charged up at the Don Harrington Discovery Center and Space Theater, a place for all ages to see science in an exciting way, or stop to smell the roses (and other flowers!) at the Amarillo Botanical Gardens.

Amarillo is the place to make memories, whether you’re spray painting a Cadillac or eating a 72-ounce steak. A place filled with cowboy boots, guitars and paint brushes, wide open spaces, and friendly faces; Amarillo would be more than happy to see you. Happy Trails!

To learn more about enjoying Amarillo, check out www.visitamarillo.com. 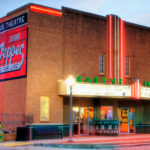 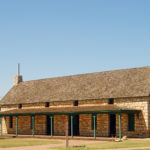