Factoids are those entertaining tidbits that you can repeat to your friends back home. You know those “Did You Know” items that always seem to get family and friends nodding in agreement while they wish they were on the trip, too.

In Amarillo, start at Rick Husband Amarillo International Airport. It has one of the longest civilian runways in the U.S. It is 13,502 feet long. The airport is named for the late US astronaut Rick Husband, who was born in Amarillo and commanded the Space Shuttle Columbia (STS 107) which disintegrated on re-entry on February 1, 2003. All 7 crew members died.

When you are in Amarillo, you are closer to three state capitols (Santa, Fe, NM, Oklahoma City, OK and Denver, CO) than to the Texas state capitol- Austin. And depending on the route you take, Topeka, KS, is closer than Austin as well.

More than 3.3 billion pounds of beef are produced each year by cattle feeders in the Amarillo area. That’s enough beef for hamburgers to circle the globe 30 times.

Sarai, the Amarillo Zoo’s female lioness, holds the real “world record” for eating the famous Big Texan 72 oz. steak – she downed it in 80 seconds! Molly Schuyler tops the human list- she ate three complete 72 oz. steak dinners in 20 minutes.  Turns out women are more successful than men, with 1 out of 2 completing the meal.

Amarillo is the only major Texas city on Historic Route 66.  The Golden Light Café, one of the longest continually-operating restaurants along the entire 2,500 mile length of Route 66, serves more than 62,000 hamburgers a year. They also slice and fry over 46,000 pounds of potatoes a year.

South of Amarillo is Palo Duro Canyon State Park.  The state park was at the top of the Fodors.com list of the Top 10 State Parks in the nation. More than 400,000 people visit the state park each year. Palo Duro means hard stick or hard wood, perhaps referring to the juniper trees that have been in the canyon for hundreds of years. It is assumed that Spanish conquistadors, the first Anglos to see the canyon in the 1540s, gave it the name.

The outdoor musical drama TEXAS, located in the state park, has been performed more than 3,000 times and been seen by more than 4 million people.

The Panhandle-Plains Historical Museum, Texas’ largest history museum, is sometimes referred to as The Smithsonian of Texas. PPHM includes more than 2 million artifacts and covers 235,000 square feet.  The collection includes the oldest remaining Ford produced for sale in the world, a 1903 Model A that was #28 off the manufacturing line.

In the evening you may head to Wonderland Amusement Park. It is lit up by more than 20,000 light bulbs. Can’t see? Maybe you lost your eye glasses while on a roller coaster or log flume. Glasses are the most frequently lost item at the park. 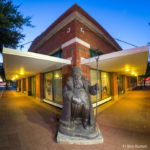