On January 17, 1920, a new day dawned for most of the United States as the 18th Amendment went into effect. Americans could no longer manufacture, sell, or transport alcoholic beverages per the Volstead Act. The Temperance movement took Texas early in the 1910s with many counties going “dry.” Beginning with the 18th Amendment, the rest of the nation was now in a time of Prohibition under President Woodrow Wilson. This time is often romanticized by books such as the Great Gatsby or old jazz songs from the likes of Louis Armstrong or Bing Crosby.

Journey back with us to a time when flapper dresses, jazz music, secret passwords ruled the day. Learn about the temperance civic groups, preachers speaking of the dangers of alcohol, underground liquor manufacturing, and Tommy Guns and how they all coexisted. The Panhandle Prohibition Exhibition opening October 17th at the Panhandle-Plains Historical Museum is designed to take you back and tell you the story of the Texas Panhandle in the 1920s and how it fit into the overall story playing out in the rest of the country.

The Roaring ‘20s were a decade unlike any other with bans on alcohol and secret drinking establishments. The Panhandle Prohibition is designed to surround the visitor with the sights and sounds of the 1920s. Augmented reality (provided by Cenveo Trafton) provides visitors with the opportunity to step back in time and hear from a local bartender and jazz musician by scanning a code on a recreated wine bottle.

“Welcome to the PPHM Speakeasy. Getting in here is hard to do if you don’t know the password or have the required membership card. Speakeasies could be anywhere from fancy clubs to people’s basements and houses to drink bootlegged alcohol or alcohol illegally made and transported,” our “bartender” will tell you as he virtually pours you a drink such as a Bee’s Knees.

Then our beautiful female jazz singer will delight you with song and of course interesting facts like, “Many famous jazz singers rose to fame during this time such as Louis Armstrong, King Oliver, Duke Ellington, and some female artists like Bessie and Ethel Walters. One jazz groups that came from Texas were Gene Coy’s Happy Black Aces of Amarillo who played original songs that came from the structure of blues music and had slower tempos than the more upbeat songs.”

After hearing from our storytellers, see flapper fashion in action and “take a stroll up” to the original Old Tascosa Bar that has been kept in pristine condition in a private collection. This bar was recently donated to PPHM and this is the first time it will be on display to the public. Behind the bar will be a large photo that shows actual cowboys in the saloon, complete with 3D elements. And finally, see artifacts from Coors Brewing Company which had to get creative to stay in business during this time by producing other products from malted milk to ceramics.

“This year marked the 100th anniversary of Prohibition. The decadence of the ‘20s is often romanticized and I think it’s a topic a lot of people are eager to explore and learn about because it is so different from today. My goal with this exhibition was to showcase how the history of prohibition in the Texas Panhandle fit into the Roaring ‘20s throughout the rest of the country. There are many fascinating stories to uncover,” said Stephanie Price, curator.

A final stop in the exhibit will be to see maps of Texas that show how many “dry counties” that do not allow alcohol from the end of Prohibition, in 1961 and finally in 2020. The numbers may surprise you.

“Each section of the exhibit will be accompanied with the theme of the day from music to dress to organized crime, visitors will understand Prohibition and all sides of the issue. There are plans to have special events around this exhibit in a way that tells the story further with fun twists when we are able to do so,” said Price.

The exhibit will be up until fall of 2021 and is included in PPHM’s regular admission prices. Following this exhibit will be Flapper Fashion in the adjacent clothing and textile gallery which will open in December of 2020. For more information on the exhibition including special events, visit panhandleplains.org or follow the museum on Facebook, Instagram, or YouTube. 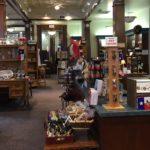